I meantioned this in another post, but I thought I'd start a new thread with it. Our Stake Presidency wanted to be able to put the words to the Hymns over the video broadcast for the overflow areas similar to how it's done in General Conference. They wanted this for several reasons.

1. Time of making, distributing, and cleaning up the Hymn copies
2. The cost of making the copies

After a bit of research we purchased a simple piece of equipment that allowed us easily to put the words to the Hymns (via PowerPoint) over the video for the overflow areas. It looked very close to the way General Conference does this.

More people sang the Hymns, it was quite loud; a benefit we weren't anticipating.

This was suprisingly easy to do, much easier than originally anticipated when we first set out to figure out a solution to do this.

In addition to a video camera with the typical overflow setup, additional equipment needed

2. A computer (Window, Mac, or Linux) with a USB port to power the Grand MagicView
3. Presentation software such as PowerPoint or OpenOffice Impress installed

Note: PowerPoint has a great option of displaying the slideshow full screen in 2nd monitor, which is the Grand MagicView. This allows me to work in the 1st monitor (a laptop) without anyone seeing it overlayed over the video.
Top

ATI All in Wonder card for graphics overlay

In high school we used an ATI All-in-Wonder card to do text & graphics overlay. It has both a TV tuner / video capture input, as well as a TV output. The program that lets you watch TV on your computer, which comes with the card, has a feature that when minimized the television broadcast becomes the windows desktop wallpaper. What this actually does is set your wallpaper to be a specific shade of pink, and then the card overlays the video in place of everything on the screen of that color. We discovered this one day when watching TV while opening up some color pallet tool in some graphics program, and noticed that the pink in question was seen as a "hole" showing the video through behind it. A power point presentation with the background color of every slide set as that shade of pink did the trick nicely for everything we wanted to do. And, it was cheap. Back in the day the card was $149, and I imagine they likely less these days.
Top

Actually all new ATI cards come with S-Video and Component In (I have been needing a new card lately as my ATI All-In-Wonder X600 is starting to die on me) though if you need to convert from RF to a picture then you need the TV-Tuner part of it.

The Windows Media Encoder is part of the package that ATI gives out which does allow captions to be inserted into the stream so you could insert the song as captions. There might be some other features which could be useful, I just haven't tried them yet.
- David
Top

External product that can do this

I know of an external product that does this very well.

Its called the POP 1280S here is a link. I know whe shouldn't highlight certain products, but I wanted to include this link to show you the possibility.

Does it include a composite video output? The write-up doesn't seem to say that.
Top

No composite Out, But

There is no composite out, It's designed for VGA out. But you shouldn't have any trouble hooking it to a Projector. It seems like all modern projectors should have a VGA Input. I have one that we use for large conferences where we are daisy chaining 3 or 4 projectors together.

This Box has VGA-In, Cable-in, S-Video-In and component-in. Typically our presenters use Powerpoint to Present, but then need to show a video clip. All they have to do is his the source button on the box and the input changes to Composite or S-video but the beautiful thing is that it is still outputting through the VGA, so I don't have to go and switch each projector to video mode, then back to VGA when the clip is finnished. It makes it very seamless.

The other great and useful feature is that it can do Picture on Picture, so you can have your video going in the POP and the Powerpoint going as the Main Screen. You can swap them (position, size, and source), and it works Great!

FYI - If your dealing with video, composite is about the Absolute worst signal. then s-video, then component-video, then RGB, Then HDMI/DVI There is a debate about Coax, but I'd probably classify it as the second worst for signal. If you ever have the choice go with something other than composite.
Top

Tomj wrote:FYI - If your dealing with video, composite is about the Absolute worst signal.

No argument there, but it's adequate for dealing with simply extending the conference for large audiences. It's also much easier to distribute composite and connect multiple projectors. If you've got a presentation that won't work on composite, then it's probably got details too small for the audience.
Top

My system takes a bit of work to set up, but provides me good results for the cost:

The basic setup I've used for the last few years is:

Out of the Windows-based video display programs I tried, I liked ChrisTV because it had flexible overlay settings (which let me use it with a variety of systems), clean video window border, allowed me to easily switch sizes/Full Screen with single keystrokes without having my mouse in the video window. By setting the master slide background color in OOo to the overlay color (some variation of black, e.g. RGB 16,0,0 or 0,16,0) then it allows me to place my video window behind the full-screen OOo slide show and have it show through (i.e. the slide background is transparent). I can switch ChrisTV in/out for controlling it (to switch video from full screen, etc.) with a minimum of display artifacts. The only reason I wish I'd gotten the Pro version is that the light version will only allow me to display on the primary desktop, which means that for my setup I have to move my taskbar to the other monitor, etc. from what I normally have it. (since I normally use a DVI monitor as my primary surface, vs. analog out for projection)

To prepare my slide show I type in the lyrics as I want them to be formatted (or hsave someone else send them to me in a text file), and double each line. My slide templates have two lines of text, one large and white and the other below it smaller and grey; this lets me display the current line while providing a preview of the next line, so that people can read ahead and not have to rely on 100% exact timing (I'm easily distracted, and am occasionally late advancing slides!)

I've investigated lots of software for making lyric display easier, but there are none yet that are cheap enough and flexible enough to suit me, so I continue to do it the painful way by assembling my own slides. I've had to deal with song-changes, etc. in the middle of talks and the two displays really help keep things smooth. Additionally, sometimes I've added a pair of video switches to bypass the computer completely (normally all video is captured/redisplayed by the computer) in case of major problems; it allows you to reconfigure/reboot during a talk if necessary without disturbing the congregation.

There is necessarily a little bit of lag (the video is delayed slightly behind the audio) because I'm capturing/buffering the video, whereas the audio is bypassing the computer. Additionally, there are slight pauses when the slides change (OOo is not very lightweight...), making the chorister's arm jump slightly. The faster the computer the better; it will minimize both delay and stutter. On a good AMD4000 machine it was very rarely noticeable to me.

My main camera is now the security camera, since it can pan/zoon; the other camera is set up at a fixed point high and off to the side. I can now keep preview windows open of both video feeds, and switch between them at will. I try not to overdo it -- if it's distracting, it's wrong -- the point is to make it natural so that it lessens viewer fatigue (a single fixed video camera can get annoying to watch for 2 hrs), yet most people couldn't tell you whether you ever switched video or not!

I messed around for a long time with the built-in NTSC-out on video cards, and finally decided that it worked a lot better if I used an external converter. It allows me to feed a nice clean VGA signal directly into the cultural hall's projector, and produces a better quality (with more control) composite signal to feed into the RF modulators for the TVs in the overflow rooms.

Anyway, it's a bit more than the minimum, but still cheap for what it can do (and pretty much everything except for the $10 software is owned by me, rather than the stake, since I have other uses for it and nobody else would know what to do with it), and our stake and the adjacent stake that uses our facilities on occasion have found it quite pleasant to watch, in fact many people who have experienced it now prefer to sit in the cultural hall instead of the back half of the chapel, because they have more options and have a better view.

PS: I just looked at that description of that Magic View, and I like it. Most gen-lock appliances are rather expensive, but if you can pick it up for $150, that's pretty reasonable. It lacks the ability to do anything but full-screen, but would allow you to maintain perfectly smooth video with a lot less computer, software, and geekiness.

Here's a couple of pictures of my camera remote. As you can see, I use only the best quality parts! 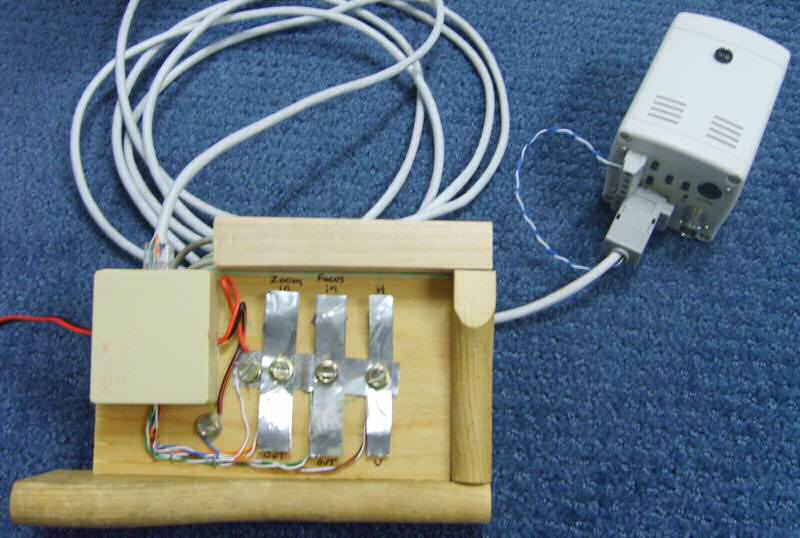 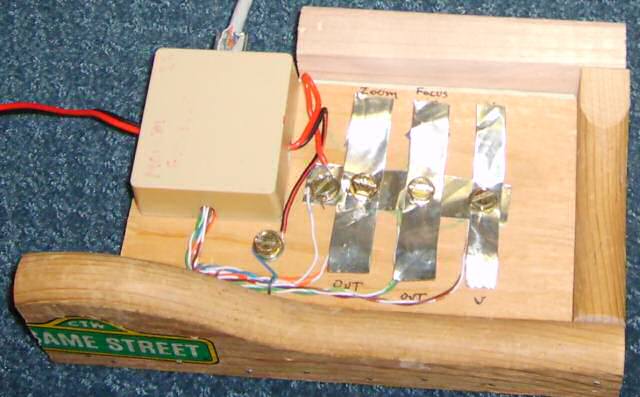 Wow! Thanks for all of the information. You were very thorough and it sounds like you have put a lot of time and effort into this.

Some of you have put a LOT of time an effort into this.

Decade engineering makes a simple text overlay device that sits between a composite source and destination and inserts text based on RS-232 data.

The new BOB-4 device is pretty cool, but the older BOB-II works just as well without the pretty colors and transparancy.

BOB-3 and 4 are available in boxes with DB9 connectors for $240 currently. NTSC and PAL are both supported.